anywhere in the lower 48

anywhere in the lower 48

Great BBQ in the heart of the Texas Hill Country

For nearly a decade, Old 300 BBQ has been serving genuine Texas BBQ to thousands of visitors, seven days a week, in the heart of the Hill Country.

Whether you’re a Blanco resident looking for a great lunch or dinner, or a Texas BBQ fan from around the country — or world — we invite you to visit us next time you are in the Texas hill country.

Our promise to you, our customer, is to serve you the absolute best Texas Hill Country BBQ. On behalf of our pitmaster, Ladd Pepper, please relax, have a beverage, be yourself, and enjoy our food. All our food is handmade and is the best food we know how to make. And, trust us, that know-how is based on years of experience, quality, and good old-fashioned hard work. 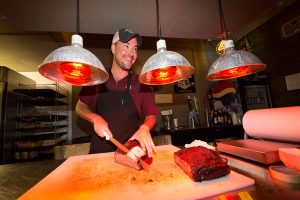 Ladd was born in Kansas City, a legendary BBQ town in its own right. He began first grade right here in Blanco and grew up along the banks of the beautiful Blanco River, where he learned to fish, hunt, climb trees, jump off rocks, and catch bullfrogs. After graduating Blanco High School first in his class, he headed off to Texas A&M University.

Although his degree was in Wildlife and Fisheries Sciences, it was while at Texas A&M that he became a true student of Texas BBQ. His first mentorship was centered on a small, but highly successful family-owned smokehouse not far from College Station. There he learned the art of cooking Texas-style BBQ in large quantities. Ladd’s passion for Texas BBQ has steadily burned since.

He’s met and cooked for his fair share of celebrities along the way: Tom Hanks, Garth Brooks, and Beyoncé, to name a few. But his favorite customers are “regular Joes”. His passion to cook and serve Texas BBQ to people who truly appreciate family, friends, and God’s blessings is second to none.

We’re located in the heart of Blanco, right next to the courthouse, on the northeast corner of Pecan and 4th (318 4th Street, Blanco, TX 78606).

If you’re in central Texas and up for a nice drive through the hill country, head on over.

from Austin: take US-290 west, then FM-165 south to Blanco. Turn right onto Chandler St., which turns into 4th St.

from San Antonio: take US-281 north to Blanco. Turn right onto 4th St.

OPEN 7 DAYS A WEEK IN BLANCO

GET IN TOUCH WITH US

Your questions, comments, feedback and other inquires are very important to us. Please use this form and we’ll be back in touch with you ASAP.